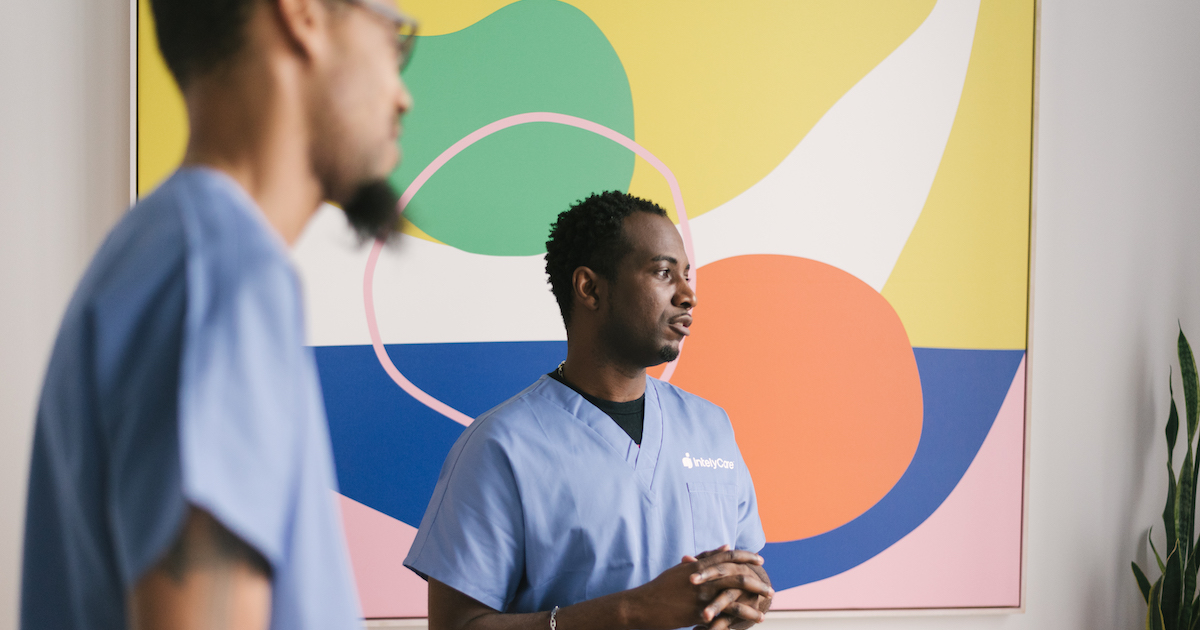 Nursing is a profession traditionally held by women. The percentage of male nurses is only 13% according to the 2021 Bureau of Labor Statistics. However, as you’ll see with two of our nursing professionals, IntelyPros as we call them here, the nursing industry is a great place for fathers who want to balance their work and life schedule. Below, Tavon and Allan explain what they feel are the benefits of working per diem and why it was the right choice for them as they raise their families.

After spending 17 years in the construction business, Tavon felt a change was needed in his life. He had three kids at home that were growing up quickly, and while construction gave him the chance to be his own boss, the schedule could be very restricting. When thinking through what his favorite part of the job was, he realized that he loves working with people. Entering into the nursing industry was a natural next step for him to take.

Tavon finds working as a nursing assistant very gratifying. “You are able to help someone and bring them back to life. I see it everyday. It’s like going into a house and remodeling it, and after three months it looks completely different. It’s the same thing with people.”

The benefits of working per diem just made sense for Tavon’s schedule. Moving into a full-time job at a facility would give someone else control of his life, which he didn’t want to do after being his own boss for so long. The transition into per diem work let him choose his own schedule so he could make it to his sons’ basketball games and his daughter’s recitals.

“I get to live the life of an everyday dad. I work six days a week, sometimes more, so time away is my time that I can give to my family. We go camping and we love the outdoors. My son even surprised me on a recent trip teaching his siblings to fish. They gutted them and cooked them over the fire. I asked where he learned that, and he said the Nature Channel.”

When asked if he would encourage his kids to follow in his footsteps, Tavon said he’s mentioned it, but he’ll support his kids in whatever they want to do.

When Allan immigrated from Uganda to the United States he noticed a cultural difference in the way the elderly were supported and cared for. Where he is from, there is a huge focus on supporting the elderly, and families often bring their aging family members home to care for them. Becoming a certified nursing assistant was something that didn’t require a long training period for Allan. It let him bring this ideology of how to care for the elderly to his home in the US. It was an easy fit – he could make money doing it, and he knew that it would provide stable work for him and his family.

23 years later, and Allan is still happily working as a CNA. As his family grew he realized that there were benefits to working per diem. It can be hard to take a vacation, but now he can choose when he doesn’t work. When he needs a break he can take a step back, rejuvenate and return refreshed for his next shift. He is even trying to encourage his own children to follow in his footsteps. In particular, he sees his 13 year old’s personality and kindness, and knows he would make a great nurse one day.

Allan likes to remind his kids that if you have your certification as a nursing assistant, you have a stable career for life, and from there you can grow into another career path whether that is becoming a Registered Nurse or something completely different.

When asked if he had any advice to give to others, Allan had this to say:

“I would tell them, this job is the foundation that tests your character and your passion for others. People should know that when they go to work, they are creating a bridge for people who can’t get something. It’s a challenging job and stressful, but it is a rewarding job for you, testing your patience and compassion and how to deal with life.”

Fathers understand the benefits of working per diem

Tavon and Allan both show that working per diem means choosing your time for work and for family. As their kids continue to get older it becomes increasingly important for them as fathers to be there to spend quality time with their families.

Our IntelyCare app lets you choose when, where, and how often you want to work. If you’re interested in making the shift to per diem, then IntelyCare might be the right choice for you.

Nursing School Burnout: Tips to Help You Keep Your Focus

Nurses, Should You Specialize?

Fall Prevention Starts With You!

Why We Need More Male Nurses

Should You Work in Long-Term Care?

What are the Levels of Nursing?

Can New Nurses Work Per Diem?

What are the 6Cs of Nursing?

What to Know About a Career Change to Nursing

5 Nursing Tips from an IntelyPro Nurse

What’s the Difference Between an LPN vs CNA?