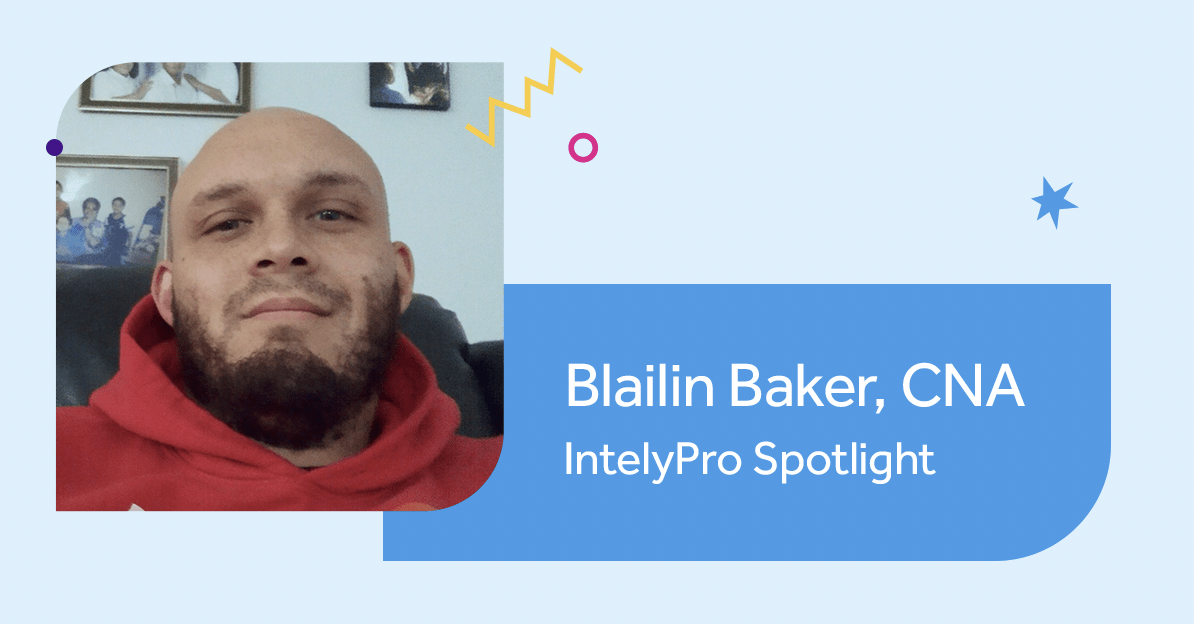 “One of the most powerful stories I heard was from a holocaust survivor.”

Blailin Baker is a long-term care Certified Nursing Assistant from Pennsylvania. His nursing career started in Nashville, Tennessee, where he got his license and started working two days after he passed his exam. His passion for nursing comes from his love of sports and the time he spent as a high-level track and field thrower.

“My wife and I lived down in Nashville for a while. In our free time, we’d organize basketball games with our co-workers.  Sports have been a big part of my life, and it’s actually tied to the reason I got into healthcare. I went to Mount St. Mary’s University, where I competed on their Division 1 Track and Field team. We had a few people who were just shy of making the Olympic team, but due to injury, they couldn’t compete. Originally, I wanted to go into sports medicine to help support athletes like them, but I realized it just wasn’t for me. I enjoy caring for people and lending my hands and heart to those who need it, so that’s why I chose to become a CNA.”

However, the most rewarding part of his job is when he can listen to the stories of his elderly residents, becoming a steward of their history.

“In my job, you meet people from all over the world. The stories they tell are fascinating, and I’ve learned so much from the people I’ve cared for. So giving them a listening ear and just being a friend to them is priceless. I wouldn’t trade it for anything.” It’s uplifting to Blailin to encounter people with different stories, world views, and life experiences. He’s honored to take care of people who are a part of history and have helped shape the world as we know it.

“I spoke to a World War Two veteran during my first shift as a CNA. He was a real gentleman. He told me a story about how he and his troop got lost and were missing for a couple of days. But somehow, they found their way back to their base. The troop was a group of seven young men at the time, and it warms my heart to say that they are all still living. It can be sad, though, because everyone’s stories don’t have happy endings. Sometimes my patients don’t make it, and that’s the toughest part of the job for me; seeing them in their final days.”

Not everyone can handle the emotional toll of losing a soul you’ve connected with. But Blailin feels honored to have cared for such inspiring people. For him, holding on to his patient’s stories is a way for them to live on. He remarks on what he’s learned from being around impaired people, whether athlete or war veteran, saying that “life is too short to let it impact the way I give care to the next patient. And I know the people I’ve taken care of wouldn’t want me to be down or depressed.”

Blailin witnessed how fragile one’s health can be when he was a college athlete. “Seeing my teammates, who were really impressive athletes, go through life-altering injuries just made me realize that it could have easily been me. It’s hard to appreciate life when you find yourself dwelling on the sad parts.” Blailin talks about the collegiate athlete experience saying that, much like nursing assistants, “athletes also need to take care of themselves. Even if it’s just taking a hot bath to relax your muscles, it’s really important to take time to care for yourself.”

When asked what advice he would give to new IntelyPros, he relays that same message, saying, “use the extra time IntelyCare allows to take care of yourself.” Before using IntelyCare, he was living on other’s schedules. He would go to the facility whenever they called him up, and he’d give all the energy he could to his patients. And when he’d come home, he’d put the same energy into his family. Without the time to practice self-care, he knew his routine was unsustainable. So working on his own terms has helped him take ownership of his life. The flexibility he’s gained by using IntelyCare has not only helped him give quality care to the residents he looks after, it’s also played a part in being a father to his two boys and a husband to his wife.

“It’s great because I can fill my schedule in a way that works best for my family and me. I know many people choose to take holidays off. Still, one of my favorite things to do is spend holidays with my family and then go to the facility for the off shift. I can go to work when my kids are asleep, and it’s just a great feeling to put smiles on the resident’s faces on the holidays.”

Blailin always finds a way to stay positive and compassionate despite the circumstances, whether it’s a long-term care provider, or a track and field athlete. He recounts a particularly sweet memory of his time as a collegiate athlete, saying, “there was a tournament I competed at where I was throwing shot put. It was a close meet, so there was a little pressure when I got up to throw, especially because I was only a freshman. But I threw the best I could, and it got us in 3rd place in our conference. It was exciting to contribute to the team like that.”

Real team players like Blailin inspire us to care for our healthcare heroes the way they care for their patients. We’re proud that our platform has helped nursing professionals like Blailin get the freedom and flexibility they deserve in their life. Thank you for sharing your story, Blailin!

IntelyCare gives nursing professionals like Blailin the ability to transform the way they work. Are you ready to take control of your life? Apply today to get started.

Becoming an Investor with the Networth Nurse

Which Grey’s Anatomy Character Are You?

What Does a Nursing Scheduler Do?

The Importance of the Resident Assessment Instrument Process

Nursing School from the Perspective of a Neurodivergent Nurse

What Does a CNA Do: Career Guide

4 Steps to Kicking Off a Nursing Competency Management Program

How To Solve Your Block Schedule Nursing Problems